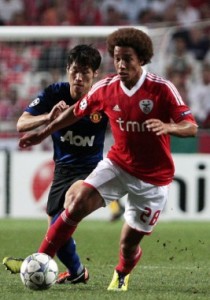 The two sides sit tied at the top of Group C after four rounds, so everything suggests that the outcome of this tie will determine who wins the first place in the group.

Manchester United enter the game high on confidence after winning last five games in all competitions, proving everyone that not even 6:1 defeat to fierce rivals City could destabilize them.

The Red Devils had a slow start to their Champions League campaign, sharing spoils with Benfica and Basel in their first two games, but back to back wins over Otelul helped them return to the right track.

Sir Alex Ferguson’s men now have a great chance to secure the first place in the group by beating Benfica, so no wonder that they are just 1.25 (1/4) with Unibet to win Group C.

The gaffer is expected to make several changes to the team that beat Swansea at the weekend, with Ashley Young, Darren Fletcher and Jonny Evans are likely to start. Nemanja Vidic is suspended for this clash, while Phil Jones should continue at right back.

After showing a lot of potential on both domestic and international stage, Benfica continued their rich vein of form going into the new season and they have yet to lose a game this term.

The Eagles are tied on points with rivals Porto in Portuguese Primeira Liga, while they are very close to securing a place in the Champions League knockout stages.

Jorge Jesus’s side managed to outclass Manchester United at their La Luz, even if they could only muster a 1:1 draw and are now hoping to avoid defeat at Old Trafford as well, after losing last three games at the same ground.

Given that the Eagles have yet to lose a game this season, the odds of 2.75 (7/4) offered by Ladbrokes on Benfica not to lose could be worth a shot.

Jorge Jesus will be able to count on Axel Witsel and Nemanja Matic, after they missed the last league game through injury and sickness respectively.

Javier Saviola misses out with a knee problem, whereas youngster Rodrigo should start up front after scoring five goals in last five games.