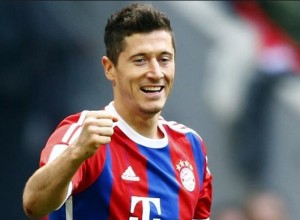 Managerial changes at Bayern Munich’s helm will not urge Robert Lewandowski to reconsider his imminent future at Allianz Arena.

The Poland striker has been the subject of heavy speculation linking him with a potential move to Real Madrid and Paris Saint-Germain at the end of the season.

French champions PSG have been the frontrunners in the race to sign the prolific striker as the Saints are searching for the replacement of Zlatan Ibrahimovic, who could decide to leave Paris when his contract expires in the summer.

PSG have reportedly prepared a hefty deal for Robert Lewandowski worth up to €100 million.

Robert Lewandowski was also the target for Real Madrid during Carlo Ancelotti’s stint at the Spanish giants and the Italian is believed to be firm on the stance that Polish star should stay in Bayern.

Lewandowski himself is very happy at Bayern, according to his manager Cezary Kucharski.

“We are very happy at Bayern Munich”, Kucharski told L’Equipe, refusing however to rule out the possible move away from Germany in the future.

“I cannot tell you anything more. In football, you can never know what is going to happen. The most important thing is that he plays in the Champions League.”

Lewandowski’s contract with Bayern Munich expires in 2019 and the player is due to have a meeting with Bayern CEO Karl-Heinz Rummenigge next week in order to discuss his future.

Poland international has been a major success with the Bavarians and he has already scored 15 goals in the Bundesliga this season.

Bayern Munich have a comfortable eight-point cushion at the top of the league standings as the departing boss Pep Guardiola has set his team’s course to winning the treble, which would be the perfect farewell for the Catalan manager.

Bayern continue their title push on Friday with their first league match after a month-long break and the Bundesliga leaders have been made firm favourites at 1.74 (14/19) @888sport to beat Hamburger SV both at half-time and full-time.