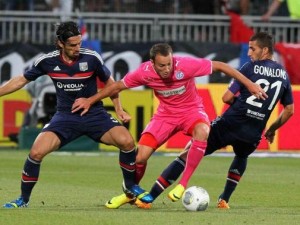 Grasshoppers might feel aggrieved after the excellent performance in the first leg was not properly rewarded, with Lyon recording an important 1-0 victory.

As a result, les Gones are currently in the driving seat, but chances are they face a difficult match at Stadion Letzigrund in Zurich.

Despite pushing Basel all the way in the Swiss Superleague title race last term, Grasshoppers were not exactly expected to make life difficult for Lyon in the Champions League third qualifying round.

It was believed the lack of European experience would prove to be a big problem for GCZ, but Michael Skibbe’s men, nonetheless, largely impressed in the first leg.

They adopted a brave approach at Stade Gerland and went on to hit the post twice inside the first 45 minutes, but ultimately had to settle for a 1-0 defeat.

However, having seen they can successfully match their more illustrious opponents, Grasshoppers will not be afraid to attack Lyon in the return match, so bear in mind home win pays 3.30 (23/10) at Sportingbet.

Since the match in France, GCZ played out a goalless draw with Lausanne in the league, with coach Skibbe using the match to rest some of his starters.

New signing Caio remains ineligible, whereas full-back Daniel Pavlovic is unlikely to feature as he battles an injury.

Third-place finish in Ligue 1 saw Lyon clinch another Champions League qualification, but they probably did not expect to experience so many problems at the first hurdle.

Despite going into the Grasshoppers game full of confidence following a promising performance against Real Madrid, les Gones had a really slow start to the match and could have been a couple of goals behind early on.

Lyon picked up the pace later in the game and did enough to record a 1-0 victory, courtesy of Milan Bisevac header, but they cannot really afford to relax just yet.

Remi Garde’s men do have plenty of quality and European experience, and that is one of the reasons why they are 2.55 (31/20) favourites at BetVictor to win the return leg as well.

Lyon have recently announced the capture of full-back Henri Bedimo from Montpellier, but the Cameroon international is ineligible for this match.

Get Your £88 in Free Bets!
Bet In-Play on Champions League football with Bet365 and get £200 for FREE
We Highly Recommend These Places
Share your Opinion!