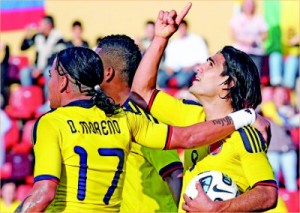 One of the most sought-after players in world football, Radamel Falcao Garcia has signed a new deal with FC Porto, the Portuguese club have revealed on their official website.

The player’s release clause has been raised from €30 million to €45 million, meaning that any interested club will have to break the bank to sign the prolific striker.

The 25-year-old attracted a lot of attention from abroad following his impressive performances at Dragao Stadium, with his 73 goals in 85 games for Porto making him one of the most prolific forwards in world football.

With his release clause standing at €30 million, Falcao was heavily linked with a move to Chelsea, especially after former Porto coach Andre Villas-Boas took over the reigns at Stamford Bridge, but it now looks as the Colombia international will remain a Dragon for at least one more season.

The player is currently proving his worth at international stage, having helped Colombia reach the quarter-finals and earn the clash with Peru in the first knockout round.

After failing to score against Costa Rica and Argentina, Falcao scored a brace against Bolivia, and he is now expected to continue the impressive scoring form against Peru.

The Colombian is currently trailing Argentina’s Sergio Aguero by one goal, but I still see a good value in odds of 7.00 (6/1) offered by Sportingbet on Falcao to become top goalscorer of the 2011 Copa America.