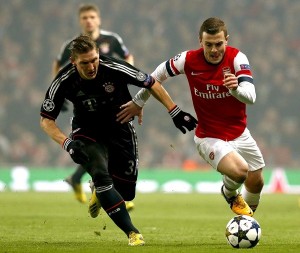 Having narrowly missed out on a place in the quarter-finals despite winning the return leg at Alianz Arena last term, Arsenal will be looking to go one step further this season and eliminate mighty Bayern, but that is easier said than done.

Carrying a two-goal lead from the first leg and going into the game on the back of a ten-match winning run, the Bavarians are clearly the favourites to go through.

Despite winning all their fixtures after the winter break, Bayern Munich had to survive a nervy half an hour at the Emirates, and they were pretty much on the back foot until Wojciech Szczesny was sent off for a foul on Arjen Robben.

And in spite of missing the resulting penalty, the Bavarians went on to score two second-half goals to gain the upper hand ahead of the return match.

Pep Guardiola’s charges also experienced some problems in weekend’s fixture against Wolfsburg, but the goal they conceded early on only inspired them to show what they are capable of.

And having eventually recorded a 6-1 triumph over one of league’s form sides, it is no surprise Bayern are 1.33 (1/3) to defeat Arsenal at Alianz Arena.

After resting a number of first team regulars against Wolfsburg, Guardiola will have the likes of Schweinsteiger, Mandzukic and Thiago back to the side.

Franck Ribery and Xherdan Shaqiri have both returned into action, leaving Holger Badstuber as the only unavailable player.

Having just made a giant step towards winning the first trophy after nine years, Arsenal may have problems focusing on the Champions League clash against Bayern Munich.

The 4-1 victory over Everton not only meant the Gunners will face Championship side Wigan Athletic in the semis, but turned them into main candidates for the title with Hull City and Sheffield United battling for the other place in the final.

Nevertheless, the prospect of ending the long trophy drought is likely to serve as an additional confidence boost ahead of the business end of the season.

The Gunners may be travelling to Munich with a two-goal deficit, but having enjoyed a 2-0 triumph at Alianz Arena last term, they are priced at 10.00 (9/1) to do it all over again.

Olivier Giroud will be recalled, but the game comes too soon for Aaron Ramsey and Wojciech Szczesny is suspended.

Laurent Koscielny should be fit to play, but Nacho Monreal, Jack Wilshere and Theo Walcott remain on the sidelines.