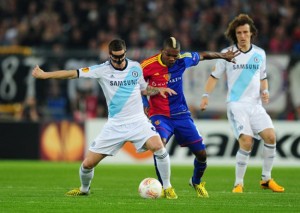 It will be up to Swiss champions FC Basel to attempt and stop red-hot Manchester City in their tracks, but that is clearly easier said than done.

The Citizens recorded yet another comprehensive triumph at the weekend and they head to St. Jakob-Park in excellent spirits.

FC Basel surprised everyone by making it to the Champions League knockout stages, pipping very good CSKA Moscow and Benfica sides to the second place in the group.

This will be their first appearance in the Last 16 phase after three years and the Swiss side will be looking to make the most of this opportunity.

FC Basel haven’t really impressed on domestic stage this season, as they currently sit five points behind leaders Young Boys, having suffered a disappointing defeat to Lugano some ten days ago.

Raphael Wicky’s side have since defeated Thun on the road, meaning the players should have lifted their spirits a little bit.

Nevertheless, facing high-flying Manchester City is without a doubt a daunting task, although we have to point out that FC Basel defeated Benfica (5-0) and Man Utd (1-0) at home in the group stage, while losing to CSKA Moscow (1-2).

Back-up keeper Germano Vailati is out with a shoulder problem, while midfielder Luca Zuffi is struggling with a foot injury.

Manchester City are on the road to make this season one of their most successful ones in recent history, although a strong finish is required if they are to realise their goals.

A 16-point advantage at the Premier League summit should prove sufficient to claim the league title, so the Citizens can now focus on impressing in other competitions.

After easing off to the top position in their group, Man City were handed an easy draw as they are seen as overwhelming favourites to pip FC Basel to a place in the quarter-finals.

Pep Guardiola is unlikely to make too many changes to the team that faced the Foxes, with youngster Oleksandr Zinchenko expected to continue at left-back.

The likes of Gabriel Jesus, David Silva, Leroy Sane, Benjamin Mendy and Fabian Delph are unlikely to be in contention for the FC Basel game.