Torino willing to bring Immobile back 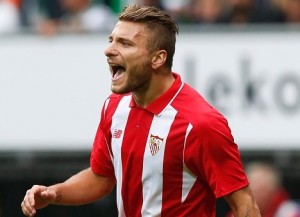 The Italian striker Ciro Immobile is currently on loan at Sevilla, but his former club Torino are reportedly willing to bring him back to Serie A this winter.

Italy international joined Borussia Dortmund in July 2014 for the fee of €19 million, but was loaned out to La Liga outfit after only a year spent in Germany.

The 25-year-old striker has played eight matches in the Spanish top tier this term netting twice in the process and could well be on the move yet again this winter.

Gianluca Di Marzio is reporting that Torino are willing to bring the Italian forward back to Serie A and that they are preparing a loan offer worth around €1 million, while Toro would also be required to pay further €8 million to make the deal permanent by the end of the season.

Torino are currently sitting in 14th place in the Serie A season and will welcome Frosinone on Saturday with the odds of 1.89 (8/9) at 888sport to claim the win both at half-time and full-time.

The Italian journalist Di Marzio claims on his website that the initial talks were already held and that there are positive developments towards the agreement.

Toro are interested in reuniting with their former player and will look to find ways to make the deal happen, but will seek to negotiate on the proposed financial aspect of the deal.

It is still unclear whether any potential deal of Immobile moving back to Italy would require Sevilla to buy out the player’s contract before selling him on to Torino.

Torino will also face the stiff competition for their target according to Sky Italia, as Sampdoria are reportedly willing to beat Torino to the signature of Ciro Immobile and are preparing a formal offer to the Spanish outfit.

Ciro Immobile has been unable to find his ground ever since he left Torino and it is believed that a move to his comfort zone would help the 25-year-ols regain his place in the national team and increase his chances of playing at the UEFA Euro 2016.