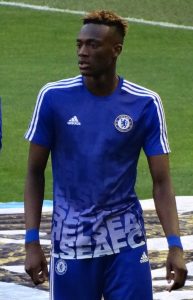 Striker Tammy Abraham says that he is aiming for a Chelsea ‘breakthrough’ next season following a brilliant season on-loan at Aston Villa.

The England U21 forward was a key player as the Villans earned promotion from the Championship under Dean Smith. He scored 25 goals in 37 appearances as Villa won the playoffs.

However, he now returns to Stamford Bridge following that stint and is keen to have an impact in West London.

“Chelsea is obviously the club that I have been at since a young so the aim is to try and breakthrough there.

“Like I say, you can never say never. We’ll see how things look.”

Upon his return to Chelsea, he could well be afforded a few more opportunities due to the Blues’ upcoming transfer ban. The club have not elected to make Gonzalo Higuaín’s loan spell permanent, whilst Alvaro Morata remains with Atletico Madrid. Michy Batshuayi will return from Crystal Palace but is likely to have limited chances at the club. That leaves Abraham and Olivier Giroud as Chelsea’s only strikers heading into the new season.

Ahead of that however, Abraham will be looking to negotiate the U21 Euros with England. He can be backed at odds of 14/1 with William Hill to be named as top scorer for the tournament.