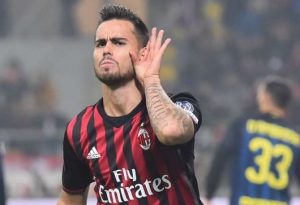 Former Liverpool midfielder Suso is a target for Tottenham Hotspur, reports from Daily Mirror are suggesting.

The 23-year-old Spanish international has been able to resurrect his career at AC Milan following a disappointing spell with the Reds which ended back in 2015 and his imposing form has alarmed plenty of clubs with Tottenham believed to be leading the race.

Suso went through an adapting period in Serie A as he was initially loaned to Genoa, but his performances for Rossoneri this term have been widely praised by fans and pundits alike.

Cadiz-born attacking-minded midfielder has thus far made 27 Serie A appearances for Montella’s side, only one on which was not a start, and has contributed with six goals during that time.

Suso has emerged as a vital member of AC Milan and Montella is thought to be unwilling to let his key player leave at the end of the season.

Tottenham Hotspur remain keen on the player regardless, as they look for reinforcements in the midfield department. The Spurs are hopeful they could land Suso, who still has another two years in his deal with the Serie A fallen giants.

In addition to Suso, Spurs are thinking about Real Madrid star Isco and Everton’s Ross Barkley.

Tottenham are coming off from a 2-1 win over Southampton which saw them remain at the second place of the Premier League standings, ten points adrift of leaders Chelsea.

The North London club will travel to Burnley on 1 April, after the international break, but they can already be found at 1.67 (4/6) @SkyBet to claim all three points at Turf Moor.