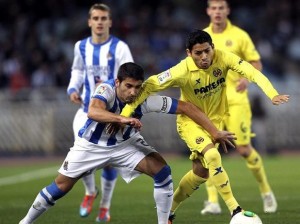 Mere four days after facing each other in a Copa del Rey clash at Anoeta, Real Sociedad and Villarreal will contest a La Liga match at El Madrigal, with both sides hoping to stay in contention for a top 4 finish.

After a brilliant start to the league campaign saw the Yellow Submarine climb to the top 4 positions, the team have done well to stay near the final Champions League berth.

Marcelino Garcia Toral’s side did well to compensate for some unexpected slip ups at home with away triumphs over Elche, Levante and Rayo Vallecano, but they definitely need to rediscover their home form as well.

Having failed to win any of their last five matches on home soil, Villarreal will be very motivated to end the barren run against Real Sociedad, but that is going to be no easy task.

Nevertheless, having held La Real to a goalless draw in midweek, the Yellow Submarine are 2.00 (1/1) favourites to win the league clash at their El Madrigal.

Boss Marcelino Garcia Toral is set to recall a number of starters that were rested in the Copa del Rey match, but Cani and Farinos continue to miss out.

Team’s Champions League campaign proved to be a major burden in the early stages of the season, with Real Sociedad largely struggling to play to their potential in La Liga.

However, as the hectic schedule started to ease off, La Real began to raise their form and they have done brilliantly to get their league campaign back on track.

A five-match winning run saw Real Sociedad revive their top 4 bid, and they now have a chance to deliver a major blow to one of their rivals for the final Champions League berth.

Given that BetVictor pays as much as 4.20 (16/5) on away win, backing La Real to extend their winning run at El Madrigal could go a long way.

Just like his Villarreal counterpart, Jagoba Zurutuza rested quite a few important players in midweek, with the likes of Vela, Prieto and Bravo among those set to be recalled.

However, Angel De La Bella, Esteban Granero and David Zurutuza continue to miss out as they battle various injuries.