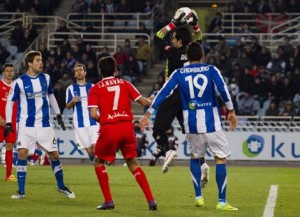 Real Sociedad will attempt to extend their unbeaten run to eight games and thus remain in the top half of the La Liga standings, whereas Sevilla desperately need a win after taking just one point from last four league games.

Real Sociedad started this season with survival as their main objective and the Basque side appear to be on the right track at the moment.

Following a decent start to the league campaign, they experienced a major dip in form in October, but the dismal run of results was short-lived.

Back to back victories over Malaga and Rayo Vallecano acted as a huge confidence boost and the seven-match unbeaten run they are on now saw them climb to the top half of the standings.

Real Sociedad may have failed to win their last three home games, but 4-2-2 home record in La Liga is probably a reason why home win pays 2.50 (3/2) at Stan James.

Boss Philippe Montannier has no fresh injury worries, meaning he is likely to field the same side that earned a goalless draw at Granada.

Despite starting the season strongly, Sevilla allowed themselves to slip into the bottom half of the standings, but that is not the worst that can happen.

Unless los Rojiblancos start winning soon, they will find themselves in the danger zone, which would be a huge disappointment.

While taking just one point from last four league games, Sevilla recorded two impressive victories in Copa del Rey, beating Espanyol 3-0 and Mallorca 5-0, hinting they might just be able to return to the right track.

Centre-back Emir Spahic returned into action after recovering from an ankle injury, but Hedwiges Maduro is doubtful with the same problem.

Federico Fazio is suspended, while Ivan Rakitic and Piotr Trochowski are both out injured. Winger Diego Perotti could return from a hamstring problem.