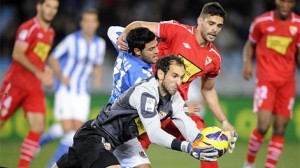 Fifth-placed Real Sociedad will be looking to further improve their top 4 hopes when they take on high-flying Sevilla on Saturday afternoon.

Los Rojiblancos are still very much in the title race, while they are looking to make amends for the embarrassing Copa del Rey loss to Real Madrid.

Real Sociedad have been enjoying a dream season and they are currently outside of Champions League positions thanks to inferior goal difference alone.

La Real didn’t have such a good start to the new La Liga campaign, but they have since improved a great deal, winning six of their last eight league matches.

Real Sociedad have also impressed in Copa del Rey, and they are on the verge of reaching the quarter-finals after the 3-1 victory over Villarreal in the first leg.

Taking their recent performances into consideration, it is not that surprising that Eusebio Sacristan’s charges have been made 2.38 (11/8) favourites to defeat Sevilla.

Caros Vela and David Zurutuza both returned into action against Villarreal, and they should keep their places in the side.

However, Imanol Agirretxe, Carlos Martinez and Markel Bergara are still struggling through injury and they are definitely out of contention.

Sevilla, too, have been quite impressive this season, getting through to the Champions League knockout stages and flying high in La Liga.

Just like his predecessor Unai Emery, Jorge Sampaoli quickly managed to rebuild the squad and got los Rojiblancos playing to their potential.

This has resulted in Sevilla finishing the first part of the league campaign in third place, one and four points behind Barcelona and Real Madrid respectively.

And while winning the La Liga title seems a tall order at the moment, los Rojiblancos will give their best to remain close to the top for as long as possible.

A two-week break seems to have had a negative effect on the player as Sevilla were soundly beaten by Real Madrid in Copa del Rey clash, but the league game against top 4 rivals Real Sociedad is clearly more important.

Jorge Sampaoli will have to make do without the suspended Adil Rami, whereas Daniel Carrico, Benoit Tremoulinas and Michael Krohn-Dehli are long-term casualties.