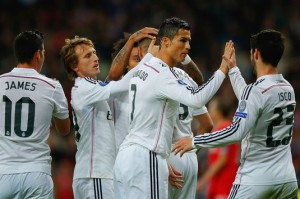 Following the controversial yet very important triumph at El Madrigal, Real Madrid take on struggling Las Palmas in an attempt to further cement the first place in the standings.

Los Amarillos have been quite disappointing of late and they clearly face an uphill task at Santiago Bernabeu as they hope to avoid fifth straight defeat.

Real Madrid head into the business end of the season looking down on their La Liga title rivals and while Atletico Madrid appear to be out of the chase, Barcelona and Sevilla still harbour championship ambitions.

Following the unexpected defeat to Valencia in midweek, los Blancos were under a great deal of pressure ahead of the trip to El Madrigal and it definitely showed.

Real Madrid were two goals down going into the final half an hour, but they then staged an amazing comeback, scoring three goals to record a valuable victory.

Los Blancos were heavily criticised for the manner of their win as they were believed to have had help from match officials, so they will want to prove the doubters wrong with a strong performance against Las Palmas.

Real Madrid are available at 1.57 (4/7) for a half-time/full-time win, and we do expect them to record a big triumph against los Amarillos.

Gareth Bale picked up a minor ankle injury in the Villarreal game, but he should be fit to face Las Palmas, unlike Danilo and Raphael Varane.

Las Palmas enjoyed a very good start to the current season and they even managed to hold Real Madrid to a 2-2 draw, but the team suffered a major slump in form at the start of February.

Los Amarillos have now lost each of their last four La Liga fixtures, scoring just one goal in the process, although all those games were lost by a single-goal margin.

This is enough to suggest that Las Palmas may not have been fortunate enough to get something from those games, but not even Lady Luck will be able to help out against mighty Real Madrid.

Since the 4-2 triumph over Valencia back in August, los Amarillos have failed to win any of their next 10 away games in La Liga (D2 L8), meaning they don’t have much to hope for ahead of the trip to Santiago Bernabeu.

Kevin-Prince Boateng and Helder Lopes should be able to play after recovering from minor knocks, but Marko Livaja, Michel Macedo, Javi Castellano and Montoro are definitely out.