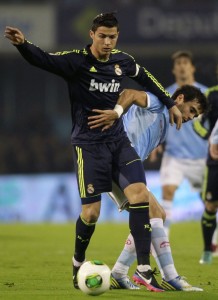 Real Madrid remained in the hunt for the second position in the standings by defeating Levante on the road and they now how to see off Celta Vigo as well.

The Sky Blues were unable to keep their top 4 hopes alive as they shared spoils with Villarreal, but they, nonetheless, arrive at the Bernabeu in good spirits.

It didn’t take long for the fans and media to start asking for Zinedine Zidane to be sacked as the Frenchman is learning the hard way what it is like to be in the hot seat at Santiago Bernabeu.

Back to back setbacks against Malaga and Atletico Madrid placed pressure on the entire team as not only are los Blancos out of the title race, but they could now miss out on the second position as well.

The team managed to return to winning ways in midweek as they defeated Levante on the road, with youngster Borja Majoral earning his first ever La Liga start.

Los Blancos now need to continue with strong performances and they are available at 1.91 (10/11) for a half-time/full-time win.

Zinedine Zidane will have Sergio Ramos and Dani Carvajal back from suspension, while Marcelo and Luka Modric should be available as well.

Gareth Bale and Alvaro Arbeloa are close to returning into action, but Karim Benzema remains sidelined through a muscle problem.

Celta Vigo are enjoying one of the most successful seasons in recent years and European qualification would probably be a great way to cap it off.

If it hadn’t been for Nolito’s injury, the Sky Blues would have probably mounted a serious top 4 challenge as well, but they are, nonetheless, sitting pretty in sixth.

Back to back wins over Eibar and Getafe were followed by a goalless draw against Villarreal, where Celta were by far the better team.

That means that Eduardo Berizzo’s charges have now produced three very good performances in a row, meaning they can head into the Real Madrid game high on confidence.

The visitors will have midfielder Pablo Hernandez back from suspension, whereas Theo Bongonda and Nemanja Radoja could be back to the side.

Former Barcelona defender Andreu Fontas is the only unavailable footballer at the moment, as there are no fresh selection worries for Berizzo.