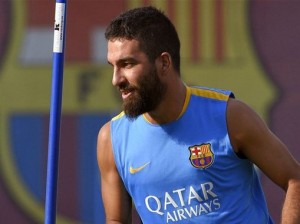 French giants AS Monaco are the latest club to have joined the chase for Barcelona midfielder Arda Turan, according to reports from Spain.

The Turkish footballer is not entirely happy with his status at Camp Nou and is reportedly considering his options.

He has been linked with quite a few top clubs of late, and it appears that Monaco are in the mix as well.

The Principality Club are not interested in purchasing the player’s contract, but are ready to pay his €7 million yearly wages in full should he join on a season-long loan.

Despite joining the Catalans last summer, Turan was only allowed to make his debut in January and he made a total of 18 league appearances for Barcelona, scoring two goals.

However, with the club recruiting Andre Gomes from Valencia, he could struggle for playing time next season and may be ready to move on.