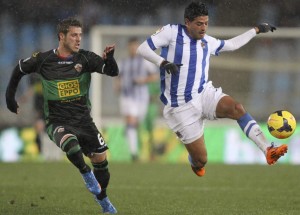 Las Palmas are in desperate need of a morale-boosting victory following a three-match losing run, and they are now up against top 4 hopefuls Real Sociedad, who are looking to bounce back from the Villarreal defeat.

Los Amarillos have done much better than expected this term, climbing to the top half of the standings midway through the season.

However, the team have now suffered a major slump in form, slipping to 12th after defeats to Granada, Sevilla and Malaga.

The fact that all those games were lost by the narrowest of margins is enough to suggest that Lady Luck has not been smiling on Las Palmas of late.

Despite recruiting former Real Madrid striker Jese Rodriguez, los Amarillos clearly have problems up front as they could only score one goal in said defeats.

Last Palmas’ 15-match unbeaten run in La Liga home games came to an end against Sevilla and los Amarillos will give their best to return to winning ways.

They will have to make do without Javi Castellano, who has suffered a knee injury, while Momo, Montoro and Michel remain sidelined as well.

Real Sociedad are enjoying a season to remember as they are very much in the race for a top 4 finish in La Liga, sitting four points behind Atletico Madrid in the league standings.

La Real have just suffered a costly defeat to Villarreal that complicates their position, but there is enough time for the team to kick-start their top 4 bid.

This is clearly a good time to be facing out-of-form Las Palmas, who lost three league games in a row, so maybe you should consider backing Real Sociedad at 2.62 (13/8).

La Real have done fairly well on the road this season, winning six of last ten away matches, and they defeated Espanyol last time out.

It remains to be seen whether star striker Willian Jose will return to the side, but Imanol Agirretxe, Carlos Martinez are definitely out.

Market Bergara has resumed training after a four-month lay-off through an ankle injury, but he will need few more weeks to be ready for selection.