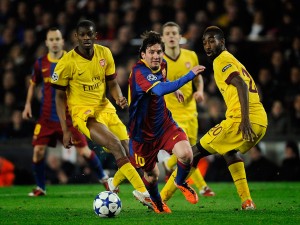 Barcelona desperately need a morale-boosting victory after back to back setbacks against Malaga and Juventus, even though the La Liga trophy appears to be outside of their reach.

Real Sociedad are no longer fighting for a top 4 finish, but they remained in Europa League positions thanks to a 3-1 triumph over Sporting Gijon.

This is proving to be quite a disappointing season for Barcelona, and it is now clear that boss Luis Enrique will not leave on a high.

The Catalans are expected to lift the Copa del Rey trophy, but they are on the verge of Champions League exit and unlikely to pip Real Madrid to the league title.

Back to back defeats to Malaga (0-2) and Juventus (0-3) will have served as major blows to the players’ confidence and it remains to be seen how the team will respond.

The tensions are high in the Barcelona dressing room, with Leo Messi having reportedly demanded from the club chiefs to let go of certain players at the end of the season.

The Catalans are available at 1.22 (2/9) to defeat Real Sociedad on Saturday evening, but, given the circumstances, the odds do not look too attractive.

Javier Mascherano is unlikely to be risked after picking up a minor injury, whereas Neymar misses out through suspension.

Real Sociedad did much better than expected this season, having even mounted a top 4 challenge, although they were ultimately unable to keep up with the likes of Atletico Madrid and Sevilla.

La Real suffered a major dip in form at the beginning of March, taking just one point from four league fixtures, and scoring mere one goal in the process.

Real Sociedad returned to winning ways last weekend, hammering Sporting Gijon 3-1 at Anoeta, and they now head to Camp Nou having nothing to lose.

La Real will be vying Villarreal, Eibar and Athletic Club for two remaining Europa League berths, but defeating Barcelona on the road is likely to prove a tall order.

Alvaro Odriozola continues to miss out through injury, but Geronimo Rulli, Raul Navas and Yuri should play despite minor knocks.

Experienced forward Imanol Agirretxe resumed light training after a four-month injury lay-off, but he is still weeks away from returning into action.