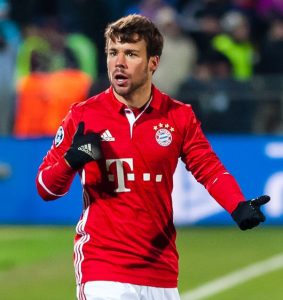 Atletico Madrid are reportedly eyeing up a swoop for Bayern Munich full-back Juan Bernat as a replacement for Filipe Luis.

According to Spanish publication AS, Diego Simeone’s are set to lose the Brazilian defender to Paris Saint Germain and are eyeing a swoop for Bernat to fill the void left by the former Chelsea man.

The report does not indicate any fee having been agreed between Bayern and Atletico but that the latter are extremely keen on a deal for the Spaniard. It has however been suggested that PSG have already table a 5million euro offer for Luis, and that he is interested in a move to the French capital, hence the need for a replacement at the Estadio Wanda Metropolitano.

Bernat, 25, has been with Bayern Munich since his approximate 10million euro move from Valencia in 2014. In that time, he has made 111 appearances for the German champions, scoring five goals.

However, his opportunities have been limited in the last few seasons. The seven-time Spanish international only made 12 appearances in all competitions last season, so could enjoy more first team football with Atletico.

Simeone’s troops play their first game of the season on Monday evening against Bernat’s former club Valencia. Atletico are priced at 23/20 with William Hill to claim victory, whilst Valencia are available at 12/5.