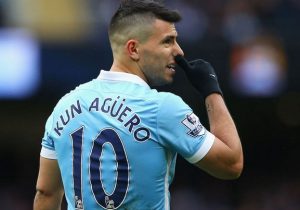 Manchester City striker Sergio Aguero picked up a rib injury last week when a taxi driving him home from a concert in Amsterdam hit a post on the side of the road.

The 29-year-old Argentina forward suffered a broken rib and it was initially thought he would be out for anything from two to four weeks.

Manchester City’s medical team have examined the diminutive striker and it was thought that Aguero could be on his way back to full recovery for a home clash with Stoke, immediately after the international break.

Argentina’s team doctor Donato Villani has poured cold water on such claims as he is not nearly as optimistic after examining Aguero himself claiming Argentina international could be set for a six-week layoff.

Villani was quoted telling TYC Sports that Aguero can’t leave his house or get in or out of his car adding that ‘he didn’t look good’.

“He is not in very good spirits because he was determined to come here and play. This incident, which is totally not his fault, leaves him out for the two [Argentina] qualifying matches because he will be a month and a half without playing.”, Villani said.

Should Villani’s predictions come true, Sergio Aguero could end up missing Manchester City’s Champions League match at Napoli on 1 November and the Premier League fixture against Arsenal a weekend afterwards.

Aguero would also miss out on Argentina’s World Cup playoff against New Zealand if Aliceleste fail to improve their current standings.

Argentina sits fifth in the CONMEBOL standings ahead of their qualifier against Peru at La Bombonera Stadium.

Albiceleste can be found at 1.75 (3/4) betting odds to claim a Half Time/Full Time win on Friday.