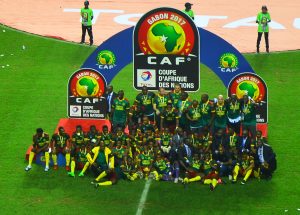 The African Cup of Nations continues on Thursday evening as two of the tournament’s favourites, Senegal and Algeria, clash at the 30 June Stadium in Cairo.

Both sides made a perfect start in Group C and will look to edge closer to the knockout rounds with another victory. The Teranga Lions notched a 2-0 win against Tanzania, whilst Algeria defeated Kenya by the same scoreline. Senegal sit at 11/10 with Paddy Power to make it back-to-back victories, whilst Algeria sit at odds of 13/5 to notch consecutive victories as the same AFCON tournament for the first time since 1996. A draw can be backed at a price of 21/10.

The two can also be backed to repeat that scoreline with another 2-0 win. Senegal are at 17/2 with Betfred  to run out 2-0 victors, with Algeria to do the same available at a large 16/1.

Coming into the match, both sides are on excellent runs of form. Aliou Cissé’s Senegal have won their last seven games in all competitions. In that time they also only conceded one goal and even that came in the 2-1 friendly victory against Mali before the tournament. They are at a price of 7/5 with William Hill to earn another shutout and their first against Algeria since 2008.

Meanwhile, the Fennec Foxes are also in great form having only lost one out of their last ten games in all competitions. They have also kept three clean sheets in their last seven matches against Senegal at AFCON. They are available at odds of 9/4 to notch yet another on Thursday.

Looking at the match itself, Liverpool forward Sadio Mane should return for the clash having missed his nation’s opening win through suspension. The speedy forward sits at odds of 5/1 with Betfair to hit the opening goal of the match. The team is blessed with plenty more attacking talent in the form of Ismaila Sarr and Keita Balde and they too could be candidates to score first.

Whilst Algeria are not quite blessed with the same attacking talent as their upcoming opponents, they still have a few players recognisable to supporters of the Premier League. Manchester City record signing Riyad Mahrez is the star man on the team and would be more than capable of causing Senegal a few problems and is at odds of 10/1 to open the scoring. Islam Slimani, who has had a wretched spell on loan at Fenerbache from Leicester City, is surprisingly more fancied to net first at 8/1. However, that could be down to the double he scored in the 2-2 draw between the two sides when they last met back in 2017.