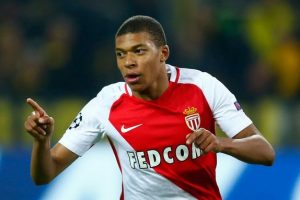 French sensation Kylian Mbappe has half of Europe chasing him following a string of impressive displays for AS Moanco this season.

The 18-year-old has been in subline form this season for the Principality club and the likes of Arsenal, Manchester City and Manchester United have already been alerted by his imposing presence on the brightest stage.

Mbappe scored 12 Ligue 1 goals in 11 starts this season, whereas he also bagged four Champions League goals for his club, including a brace in midweek’s rescheduled Champions League 3-2 win in the first leg of the quarterfinal over Borussia Dortmund.

The French side are in good position to secure their place in the Champions league semifinals thanks to a valuable away win and AS Monaco can already be found at 2.90 (19/10) @Bet365 to win the second tie at Stage Louis II as well.

Kylian Mbappe has been in great deal responsible for AS Monaco’s scintillating form this term and huge interest in his services can hardly come as a surprise.

According to reports from the Spanish outlet Marca, Real Madrid are one step ahead of the competition for Mbappe’s signature as Los Blancos are seemingly closing in on an option to sign the highly-rated midfielder in 2018.

Mbappe has been urged to remain with AS Monaco and continue his stellar rise before making a timely move to a bigger stage and La Liga giants want to make sure they secure a future deal to bring Mbappe to Santiago Bernabeu.

The 18-year-old French talent is believed to be a huge fan of Real Madrid and Cristiano Ronaldo, which makes future move to Real Madrid more than just a possibility.

Real Madrid officials are reported to have already set the plan in motion and Marca claims that a world-record transfer in excess of €100 million could be on the cards this summer.

AS Monaco are not under financial pressure and are holding out for a whopping transfer fee which at this point remains the only dilemma for Los Blancos, who are pondering whether to wrap up the deal this summer or wait for another year.