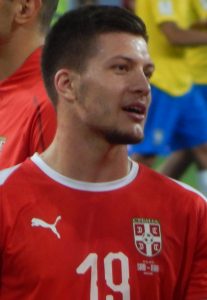 Eintracht Frankfurt sporting director Fredi Bobic has told that there has been no contact from Real Madrid over the signature of striker Luka Jovic.

There were reports in the Spanish press that Los Blancos had already agreed a deal to sign the forward this summer after a stellar season in the Bundesliga. However, Bobic has since refuted those claims, suggesting that the Spanish giants have not been in touch at all.

Talking to ESPN FC, he said: “There has been no contact with Real Madrid.

“For once, I don’t have to use a white lie, they really haven’t been in touch yet. I know them very well.”

The Serbian striker only penned his permanent contract with Frankfurt a couple of weeks ago after initially joining on a two-year loan deal from Benfica.

He has been in stunning form throughout the current campaign, scoring 26 goals in 44 appearances in all competitions, hence the links with Real. He also opened the scoring as Eintracht came up against Chelsea in the semi-finals of the UEFA Europa League in the week.

He will hope to find the net as Die Adler take on Bayer Leverkusen on Sunday. He is available at odds of 6/1 with Paddy Power to score the opening goal.