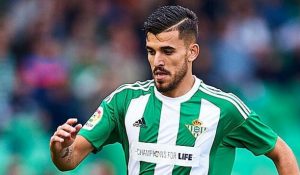 La Liga title holders and European champions Real Madrid have officially completed a deal for the highly-rated Real Betis midfielder Dani Ceballos, who will join Los Blancos on 21 July on preseason in the United States.

The Spanish Under-21 international has agreed on a six-year deal with Los Blancos and will move to Madrid after the Champions League winners activated his €15 million release clause.

The total sum of the transfer could rise up to €18 million, it is reported, due to additional fees related to a deal being activated this summer.

Real Betis and Real Madrid are believed to have reached a deal after slight disagreements over the payment dynamics with Los Verdiblancos insisting on a lump sum payment rather that proposed series of instalments.

Dani Ceballos could return to Real Betis on loan during the 2017/18 season, although such clause is not believed to be included in the transfer.

Real Madrid currently boast a tightly-packed midfielder and the talented Spanish international could face serious competition for places in the likes of Luka Modric, Toni Kroos, Mateo Kovacic or Marcos Llorente among others.

Dani Ceballos hit the scene this summer with a string of impressive displays for Spain at the Under-21 European Championship in Poland.

Barcelona and Juventus were among clubs following the talented midfielder, but a move to Santiago Bernabeu is thought to have always been the player’s preference.

The 20-year-old Real Betis starlet made 30 La Liga appearances last season, scoring two goals and providing as many assists in the process.