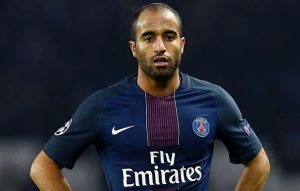 Out-of-favour Paris Saint-Germain winger Lucas Moura is widely expected to end his frustration over the lack of first-team football this month.

The Brazilian international has long been linked with a move away from Paris with Arsenal and Manchester United seen as potential new destinations for the 25-year-old.

A new name has appeared however with Le Parisien reporting that La Liga side Real Betis have joined the race to sign Moura during the winter transfer market after the player himself stated that he would be open to a move to La Liga.

“I believe I’d be well suited to La Liga, with my speed and my technique”, Moura said.

The Spanish outfit are said to have already tabled a club-record bid for Moura. Real Betis have submitted an initial offer worth €18 million, plus a further €12 million in add-ons and bonuses.

Paris Saint-Germain are reportedly holding out for a transfer fee in the region of €40 million and could very well price Real Betis out of the deal.

Lucas Moura has been pushed down the pecking order in Paris with manager Unai Emery preferring world record signing Neymar and former AS Monaco star Kylian Mbappe as complements to Edinson Cavani in the attack.

The Brazilian has yet to start a single match for the Parisians this season, having only made five substitute appearances thus far.

Moura has a good chance of featuring for PSG on Wednesday however with PSG set to welcome Guingamp in the French Cup.

Paris Saint-Germain are firmly positioned to record a Half-Time/Full-Time win at 1.53 (8/15) betting odds stacked in their favour.