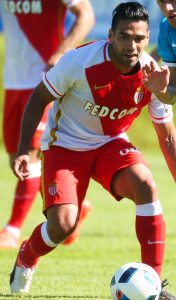 AS Monaco striker Radamel Falcao has been linked with a return to former club Atletico Madrid, according to reports in Spain.

As per Mundo Deportivo, the 33-year-old is being considered as an option to fill the void left by departing striker Antoine Griezmann, who has already announced that he will be leaving the club this summer.

Falcao previously had a highly successful stint in Madrid between 2011 and 2013. Signed from Porto, he made 91 appearances in all competitions, scoring 70 goals in all competitions, claiming the La Liga top goalscorer award for the 2011/12 season. The Colombian also managed to lift a few pieces of silverware, including the UEFA Europa League, UEFA Super Cup and the Spanish Cup in 2012/13.

He left ahead of the 2013/14 season in a big-money switch to AS Monaco where he won Ligue 1. However, injury problems have been a constant fixture in his time in France, even resulting in him being sent out on loan to Premier League outfits Manchester United and Chelsea for two seasons.

In his most recent campaign however, he has rediscovered his magic touch by scoring 16 goals in 39 games in all competitions.

Elsewhere, the man who he could potentially be replacing, Griezmann, has been strongly linked with a switch to Barcelona and can be backed at a price of 4/7 with Paddy Power to make that move before the closure of the summer transfer window.