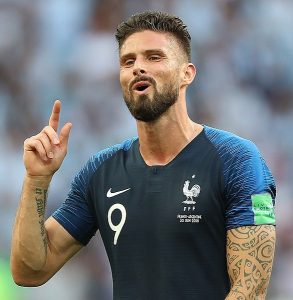 The French forward has struggled for game time at Stamford Bridge since his switch from Arsenal last January. Despite chalking up a respectable 12 strikes in all competitions this season, he has only made seven starts in the Premier League. In 57 appearances for the Blues overall, he has scored 17 goals.

OGC Nice’s president Gauthier Ganaye has already confirmed that he could potentially be interested in bringing Giroud to the Allianz Riviera.

Talking to Telefoot, he said: “[Giroud] is coming to the end of his contract, he is still performing well at his age. Why not, I will tell you that it is possible… [but] very expensive.

“With Gilles Grimandi and [manager] Patrick Vieira, we have defined the technical profile for the different positions that we are looking to strengthen.”

The striker’s contract expires at the end of the season but the Blues retain an option to extend his current deal by a further year.

Should he make the switch back to Ligue 1, it would signal a return for a striker to a league where he was a title winner with Montpellier during the 11/12 season.

His task this season though is firing Chelsea into the top four. The Londoners are at odds of 8/13 with Paddy Power to earn a top four place come the end of the campaign.