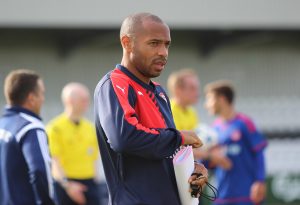 The Frenchman has been out of work since being dismissed by AS Monaco in January. His stint in charge of the Ligue 1 outfit was disastrous. Having overseen 20 games in all competitions, he was only able to lead the team to five victories before getting replaced by former manager Leonardo Jardim.

According to the reports linking him with the managerial post in New York, Red Bulls head of global soccer Oliver Mintzlaff is intending to fly to London to finalise a deal to bring Henry back to the club.

The now 41-year-old previously represented the club as a player. Henry made 135 appearances, scoring 52 goals and provided 42 assists. He won one Supporters Shield title in his time with the club.

Red Bulls have had a poor start to the new campaign. In their opening seven matches in MLS, they have only managed to take one win.

Bizarrely, there are also other managerial posts that Henry has been linked with according to bookmakers. The Frenchman is available at odds of 25/1 with Paddy Power to be named as the next permanent manager of another of his former employers, Arsenal.