Mounier poised for a swift Serie A return 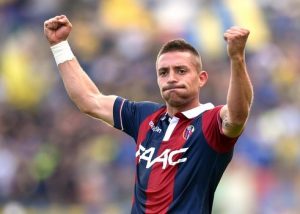 Midfielder Anthony Mounier could be in line for a surprising return to Serie A just days after Bologna sent the player on loan to Saint-Etiene.

The attacking midfielder was sent to France on Friday, but was greeted by fan protests and angry messages, which are set to initiate a swift return to Italy.

The player is wanted by Atalanta and Crotone and a deal back to Serie A could be finalised in the final 24 hours of the January transfer window.

Saint-Etiene fans did not forget Mounier’s interview from a while back when the 29-year-old France international and a self-confessed Lyon supporter and a former player of Saint-Etiene’s rivals revealed he refused to wear a green shirt as it reminded him of Saint-Etiene.

Mounier wanted to clear the air and explain his interview to the fans of Saint Etiene, claiming it was ‘a mistake he made in his youth’, but the club will instead send the player back to Italy.

Atalanta and Crotone are hoping to have a deal for the experienced 29-year-old wrapped up before the window closes and both Italian and French media report that chances are high of Mounier returning to Italy.

Mounier arrived in Italy in 2015 from Montpellier and has so far made 36 Serie A appearances for Bologna, scoring 4 goals in the process.

Bologna are currently sitting in 13th place in the standings and are getting ready for a high-profile clash with Napoli on Saturday. In form Partenopei are made firm favourites to win the game with betting odds of 1.50 (1/2) @Bet365 available on Maurizio Sarri’s men.