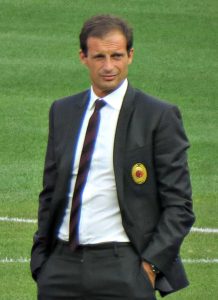 Max Allegri is planning to take a year out of football following his Juventus departure.

The Italian departed the club at the end of the season following a hugely successful stint in which he led the club to five consecutive Serie A titles, four Coppa Italia’s and two Supercoppa Italia’s.

He is set to be replaced at the club by Chelsea boss Maurizio Sarri, leading to suggestions that Allegri could go the other way to Stamford Bridge. However, he has refuted those claims, instead insisting he is stepping back from the game for a short while.

He said: “I am going to take a year off to recharge the batteries and take my personal life back in hand, rediscover after many years the affection of my family, children and friends.

“The last 16 years have felt like being in a blender. You have to take time away from what you usually spend with family and friends.

“I’ll use this year to recharge my batteries ahead of the next season.”

Former Chelsea midfielder and current Derby County boss is currently the favourite to replace Sarri at Stamford Bridge, with Allegri sitting at a price of 13/1 with Betfair to be named the new Chelsea boss.