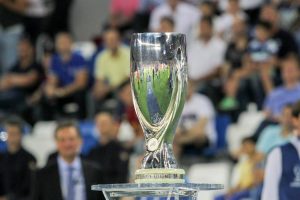 The UEFA Super Cup has a distinctly British look to it as Liverpool and Chelsea come together at the Vodafone Arena in Istanbul.

After lifting the UEFA Champions League and UEFA Europa League respectively at the end of last season, the two teams head into the match looking to once again add to their trophy hauls on Wednesday evening. Jurgen Klopp’s reigning European Champions are the far more fancied to run out the victors in Turkey and can be backed at a price of 8/13 with Betfair to win the match within 90 minutes. Meanwhile, Frank Lampard’s men are available at 9/2 to produce a shock result.

Looking at the past history of the UEFA Super Cup, it makes sense that the Reds are the favourites to claim victory considering that the UEFA Champions League winners have won the Super Cup in five out of the last six seasons. That time was the most recent edition of the competition though as Atletico Madrid squeezed past great rivals Real Madrid 4-2 in extra-time.

Chelsea will of course take confidence from that, as well their recent record of scoring against the Reds. Since taking over as manager at Anfield, Klopp has only ever claimed one clean sheet against the Blues in nine matches, with both teams managing to find the net in seven of those matches. Both teams to score this time around is at 13/20 with Paddy Power.

One aspect that has to be on form for that eventuality to come to fruition are both teams’ attacking players. In nine career appearances against Chelsea, Mo Salah has scored five goals – only against Tottenham Hotspur, Watford and Bournemouth has he scored more. After getting off the mark in the 4-1 win against Norwich at the weekend, the Egyptian is priced at 7/2 with Coral to open the scoring in this match.

Elsewhere, Lampard will surely be turning to experienced campaign Olivier Giroud as his main attacking outlet. The French striker was the top scorer in the UEFA Europa League last season with 11 goals and sits at 9/1 to hit the net first.

Regarding injuries, the Londoners could be boosted by a few returnees. Willian was previously struggling with a hamstring injury but should be cleared to return for the trip to Turkey. Although, the likes of Ruben Loftus-Cheek, Callum Hudson-Odoi and Antonio Rudiger all remain on the sidelines. N’Golo Kante has also picked up a small injury so is a slight doubt.

One big loss for the Reds will be the absence of stopper Alisson after the Brazilian picked up an injury in the victory over the Canaries. Adrian was called on that day and is likely to start in goal. Full-back Nathaniel Clyne remains ruled out with a cruciate ligament injury that is likely to restrict him the sidelines for the majority of the campaign.