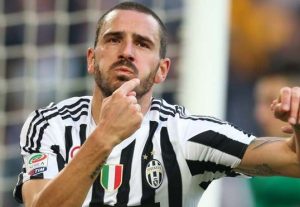 Juventus and Italy defender Leonardo Bonucci has admitted Premier League fascinates him and thus added a fresh spark to the transfer speculations linking him with a move to the British Isles.

The 29-year-old centre-back has been with Juventus since 2010 when he joined Bianconeri on a £13.2 million deal from Bari, but the reliable Italian has been repeatedly linked with a move away from Turin over the past couple of months.

The arrival of both Antonio Conte and Pep Guardiola to the Premier League have caused plenty of speculation linking Chelsea and Manchester City, respectively, to Leonardo Bonucci, who is widely regarded as one of the best centre-backs in the world.

The Manchester City links have most recently been reopened with Pep Guardiola’s public praise of the Italian defender and Leonardo Bonucci seems to be far from immune from the positive comments made by ‘the best manager in the world’.

“When the best manager in the world says you’re one of his favourite players, you act like it’s nothing, but you still can’t help but have a smile on your lips.”, Bonucci was quoted by the French magazine So Foot on the day of his team’s impressive 3-0 victory over Barcelona in the first leg of the Champions League quarterfinal tie.

Following Juventus formidable triumph, Barcelona will need a miracle to qualify for the next round at the price of 6.00 (5/1) @Bet365.

Speaking for this month’s edition of the popular publication, Bonucci also revealed his fascination towards the Premier League which is bound to cause some fresh rumours and links between the Juventus defender and Manchester City in the first place.

“It fascinates me. When I can, I watch English games, and not only for the quality of the players on display. I’m hot-headed, and I love the passion that exudes from their packed stands. It’s for that kind of thing that I’m the first on the training pitch and the last to return the changing room.”, Bonucci said.

Leonardo Bonucci is under contract with Juventus until 2021.

The defender has been enjoying a successful season with Bianconeri, but was involved in a heated row with coach Max Allegri which resulted in the player being expelled from the first-team for the Champions League match against FC Porto.

Juventus could be open to selling their prized asset Leonardo Bonucci at the end of the season, more over with the emergence of Daniele Rugani as a reliable first-team choice and a long-term defensive option for the future. Still, the interested sides should expect a hefty asking price for the experienced Juventus defender.