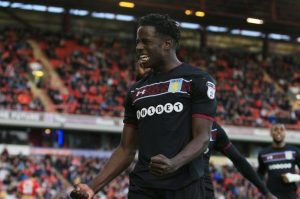 The England Under-20 international scored his second Championship goal at Pirelli Stadium as he smashed a powerful header in his seventh League start. Davis converted Ahmed Elmohamady’s cross to open the scoring and cap what went on to be another impressive all-round performance from the 19-year-old forward.

Aston Villa host-shot is the subject of intense Premier League interest with Manchester United, Arsenal and Everton all sending scouts to watch Davis in action this week.

Premier League emissaries witnessed a classic No.9 performance with Kienan Davis being a focal point of his team all the way to the 65th minute when he was taken off.

Kienan Davis’ rise to prominence makes for a fascinating story. Aged 16 he was released by Stevenage before moving to Biggleswade Town’s Under18s.

It was in 2015 that Aston Villa noticed him and decided to snap him up on the back of a prolific spell with a non-league side.

Tipped as future English star with a ‘wonderful future ahead of him’ Keinan Davis can be backed at 13/10 to continue his scoring exploits and to find the back of the net anytime against Bolton at Villa Park on Saturday.