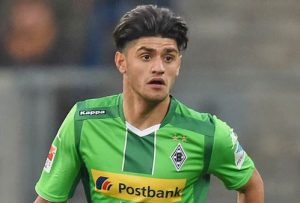 Serie A champions Juventus have stepped into the chase for a highly-rated Borussia Mochengladbach teenage sensation Mahmoud Dahoud, according to reports.

The Old Lady are believed to be preparing a move for the talented 20-year-old next summer, according to the Italian outlet Calciomercato.

The 20-year-old Syria-born German international has taken Bundesliga by storm and has already alarmed plenty of European clubs, who are keeping close tabs on this talented midfielder. A rising prospect broke through Borussia Monchengladbach youth academy before being promoted to the first team in 2014.

Dahoud has gone from strength to strength ever since making 32 Bundesliga appearances last season alone.

He added five goals and provided nine assists to round off an impressive season in Germany. Young midfielder was instrumental in helping Borussia Dortmund reach the UEFA Champions League this season.

Italian champions Juventus are reported to have watched the player during the recent international break, when Dahoud featured for Germany’s Under-21s against Finland and Slovakia.

The Old Lady join Liverpool in the chase for this talented teenager and are likely to get engaged in a real tug of war to the 20-year-old next summer.

Jurgen Klopp is a big admirer of the player’s talents and hopes to bring him to Anfield, but Juventus are hoping to beat the Premier League outfit to the signing of the highly-rated starlet.

Mahmoud Dahoud is believed to be on a £8.5 million release clause in his contract which will be active once his deal has entered in the final 12 months.

Dahoud is tied to Borussia Monchengladbach until 2018 and has already rejected an approach from his club to extend his contract. Mochengladbach are eager to install a higher release clause which will reflect the player’s value, but Dahoud in reluctant to sing a new deal and pledge his allegiance to Bundesliga club.

With the contract situation around their star performer unresolved, Borussia Monchengladbach are heading into the Champions League opener on Tuesday, looking at the betting odds of 3.00 (2/1) @Bet365 to remain unbeaten at the Etihad against Manchester City.

The German side are pitted against the likes of Barcelona, Manchester City and Celtic, with their Champions League prospects looking fairly grim even before the group stage has officially started.