Jose Mourinho not giving up on Willian reunion 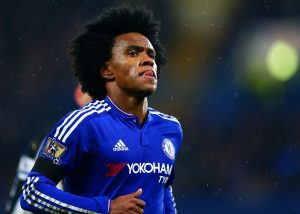 Former Chelsea manager Jose Mourinho is keen to reignite his interest for the player he worked with at Stamford Bridge.

As confirmed by the Brazilian international William himself in an interview with Globo Esporte, Manchester United boss attempted to sign him last summer, but he remained at London hoping his first-team role would not be put in danger by the new manager Antonio Conte.

Willian was a star performer for Chelsea under Jose Mourinho, but the Italian tactician is currently using the Brazilian in rotation with Pedro as he tries to balance the two players’ involvement on the pitch.

The Brazilian has been frustrated with his lack of chances as he admitted he found it tough to be on the sidelines.

“No player likes to start the game at the bank. To be honest, I don’t like it either. I like to be playing all the time”, Willian was quoted.

If reports from Daily Star are to be believed, Jose Mourinho has not given up on the idea of a reunion with the 28-year-old winger and will make another move in the summer transfer window.

With his more limited role this season under Antonio Conte, Willian could this time decide to leave the club and go to the Old Trafford in what would not exactly be an unprecedented move.

Manchester United and Chelsea have done business in the most recent past with Juan Mata and should another deal be sanctioned in the summer of 2017 it is likely to command a £40 million transfer fee.

Manchester United are set to host Watford at the weekend with the Red Devils given odds of 1.85 (5/6) @Coral to claim a HT/FT win over Hornets.