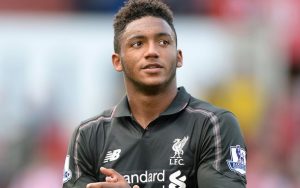 Liverpool defender Joe Gomez has penned a new, six-year deal with the club to guarantee his future at Anfield until 2024.

The news comes after the young Englishman’s promising start to the season having made 18 appearances in all competitions so far.

Upon penning his new deal, the 21-year-old expressed his delight at the prospect of playing at the Merseyside club in the long-term future.

Talking to Liverpool’s official website, Gomez said: “I’ve been at the club a few years now and have had the pleasure to play for Liverpool and experience what that means, so I am delighted to get the chance to extend my contract here.

“I love the club, I love playing and learning here, and I am happy for that to continue.”

The defender joined the club from Charlton Atheltic in July 2015, going on to make 59 appearances in all competitions.

Despite his excellent start to the season pairing Virgil van Dijk in the heart of the Reds’, Gomez is reportedly set to be out of action for approximately six weeks with a leg fracture.

In his absence, Jurgen Klopp’s men face a crunch clash against Napoli in the UEFA Champions League on Tuesday evening. Liverpool have to win if they harbour any hopes of progressing to the knockout round and can be backed at 4/7 with Paddy Power to do just that.