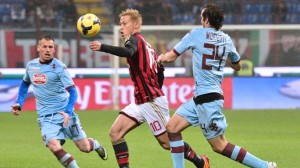 Even if the 3-1 loss to Lazio appears to have ended Torino’s European hopes, Granata will be very motivated to prove their worth against red-hot Inter Milan.

The Nerazzurri have been on fire of late, and their 7-1 triumph over Atalanta must be striking fear into Torino’s defenders ahead of Saturday’s clash.

The Stadio Olimpico outfit have been on a constant rise over the last few years and they have shown plenty of promise this term as well, but the lack of consistency is proving to be a major issue.

Granata have also struggled to match the best sides in the league, as they are winless in last nine matches against top table sides (D3 L6).

Torino do have one of world’s most expensive strikers in their ranks in Andrea Belotti, and while he has been in excellent form together with Adem Ljajic and Iago Falque, the lack of balance in the side is responsible for the record of 46 conceded goals in 28 matches.

Granata slipped to 10th following the Monday’s 3-1 loss to Lazio and they really don’t have much to hope for ahead of the clash with in-form Inter Milan.

Davide Zappacosta and Iago Falque should be recalled to the side, but Joel Obi remains the sole inhabitant of the treatment room.

Whatever happens this season, Inter Milan have built an excellent foundation for years to come and they just need to keep the current momentum going.

The Nerazzurri have recorded some resounding triumphs this term, just to show they have what it takes to mount a serious title challenge, although there have been some setbacks as well.

It has to be noted that Inter Milan have failed to impress in meetings with top 5 sides, with their last three defeats being against Lazio, Juventus and AS Roma.

However, since the 3-1 loss to the Giallorossi, the Nerazzurri produced two remarkable showings, recording 5-1 and 7-1 wins over Cagliari and Atalanta.

With that in mind, you should know that Inter Milan are priced at 2.00 (1/1) to pile more misery on Torino and extend their winless run against top table sides to 10 games.

Ever Banega keeps his place following several very good performances, while Stefano Pioli will have fully fit squad to select from.