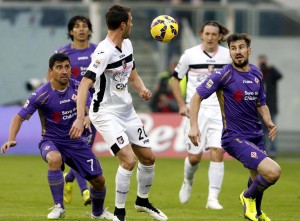 Palermo will be looking to further improve their chances of achieving a top 10 finish with a good result in their final home game of the season.

Fiorentina, on the other hand, are searching for the fourth successive league triumph that would see them clinch European qualification.

Everybody at Renzo Barbera can be quite satisfied with the outcome of the current season, with the team showing a great deal of potential to achieve a mid table finish.

The good performances have come at a cost seeing as star forward Paulo Dybala is certain to leave in the summer, while Franco Vazquez could follow.

This means that coach Beppe Iachini will have some squad rebuilding to do, but he first wants to finish the current season on a high.

Palermo ended a four-match winless run as they defeated relegated Cagliari on the road and they are now 3.60 (13/5) to beat Fiorentina as well.

Star striker Paulo Dybala is likely to be recalled as he makes a farewell to the fans at Renzo Barbera, but Edgar Barreto is an injury doubt.

Ivaylo Chochev misses out through suspension, whereas the likes of Simon Makienok, Michel Morganella and Francesco Bolzoni are out injured.

Fiorentina have once again failed to live up to pre-season expectations, and this will be another long summer for the club officials.

Viola made it to Coppa Italia and Europa League semi-finals, but could not make the final step, with 5-0 aggregate defeat to Sevilla acting as a major blow to the players’ confidence.

The good news is that Fiorentina are closing in on another European qualification, but let us not forget that they were hoping to qualify for the Champions League through league finish.

After showing some promise of late to win three successive league matches, Viola will want to hold on to the fifth place in the standings by defeating Palermo, so bear in mind away win pays 2.15 (23/20).

Juan Manuel Vargas and Federico Bernardeschi could be back in contention, but Alessandro Diamanti is banned for the Palermo clash.

Borja Valero and Joaquin should be recalled, while Khouma Babacar, Micah Richards and Giuseppe Rossi continue to miss out.