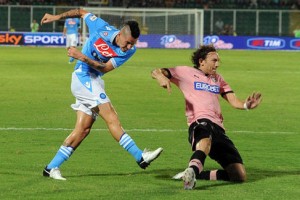 Having failed to defeat the bitter rivals in the Serie A clash at the weekend, Napoli will attempt to finally get revenge on the Bianconeri.

Juventus hold a two-goal advantage from the first leg, but they could be in for another difficult night at Stadio San Paolo in Naples.

Napoli appear to have been constantly closing the gap behind Juventus, but the psychological barrier seems to still be present.

Meanwhile, Napoli had taken the lead in the first leg of the Coppa Italia semi-final clash against Juventus in Turin, but then went on to concede three second-half goals.

This is the main reason why the Azzurri are now priced at 7.00 (6/1) to overturn a two-goal deficit and qualify for the final.

Having completely outclassed Juventus few days ago, Napoli will be feeling confident about their chances of winning this tie.

The good news is that Marek Hamsik’s injury is not too serious and the captain should be fit to play, while Pepe Reina, Faouzi Ghoulam and Piotr Zielinski should return.

Juventus suffered a minor blow to their chances of lifting sixth successive Serie A trophy as they were held to a 1-1 draw at Stadio San Paolo, although they were quite fortunate to get one point in the end.

The Bianconeri are used to playing high-pressure matches, but another under-par performance could see them miss out on the Coppa Italia final.

The 3-1 victory in the first leg can give Max Allegri and his side confidence ahead of yet another trip to Naples, but they will have to do better than few days ago.

It remains to be seen whether the manager will continue to rotate his squad, but chances are that Paulo Dybala and Juan Cuadrado will be back to the side.

Alex Sandro is another one of those who could be recalled, while Dani Alves, Mehdi Benatia and Andrea Barzagli could play a part as well.