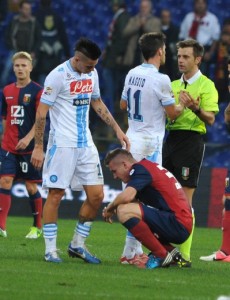 After defeating top 3 rivals Lazio on the road, Napoli aim to further cement their league position by beating high-flying Genoa on Monday evening.

The Rossoblu have started to slip down the Serie A standings and arrive at Stadio San Paolo hoping to end a five-match winless run.

It took Napoli quite a while to hit the ground running, but it appears the Azzurri have finally started playing to their potential.

The improvement in form happened at the turn of the year, with Rafa Benitez’s men winning Cup ties against Juventus and Udinese while also impressing in the league.

And even if they couldn’t avoid defeat to the Old Lady in Serie A, Napoli did well to beat Parma, Cesena and Lazio, thus becoming the main candidates for the final Champions League berth.

The Azzurri experienced all sorts of problems in the midweek’s Coppa Italia clash against Udinese, but they eventually won the game on penalties to qualify for the quarter-finals.

And having done pretty well in the league of late, Napoli can be backed at 1.40 (2/5) to claim maximum points against Genoa.

The hosts will be without the suspended Walter Gargano, while Faouzi Ghoulam, Juan Zuniga, Lorenzo Insigne and Michu are unavailable as well.

While they were heavily involved in the survival fight in each of the last few seasons, Genoa enjoyed a brilliant start to the current Serie A campaign.

Up until recently, the Rossoblu were sitting in European positions, although they have suffered a major dip in form of late.

Genoa took mere two points from last five league fixtures, but, nonetheless, remained in the top half of the standings, although the Stadio Luigi Ferraris outfit will be eager to arrest the bad run.

Gian Piero Gasperini’s charges have been pretty impressive on the road this season, with 4-3-2 away record suggesting they stand a chance when facing Napoli.

The good news is that Diego Perotti and Sebastian De Maio return from suspension, but Luca Antonini faces a fitness test.