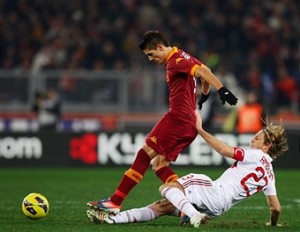 A victory over Roma would see Milan clinch the final Champions League berth ahead of the final game of the season, but the problem is their opponents need maximum points from San Siro if they are to remain in contention for Europa League places.

Even if the Rossoneri had a really slow start to the season, they have been absolutely brilliant since returning to the right track, as witnessed by the current league position.

Winning the third place in such a strong league where five or six teams challenge for the final Champions League berth in never an easy task, especially if one has such a poor start as Milan had.

Following some amazing displays in the second part of the season, the Rossoneri sit four points clear of their top 3 rivals with just two games to go, but they cannot afford to relax just yet.

Victories over Catania, Torino and Pescara helped the team revive their Champions League dream and they are 1.70 (7/10) with William Hill to make it four in a row.

After scoring 11 goals in as many league games since joining Milan in January, Mario Balotelli is 1.83 (5/6) with bet365 to continue his goalscoring run.

Roma, too, had a pretty disappointing start to the season, but they have been showing a lot of improvement since Aurelio Andreazzoli took over from Zdenek Zeman.

The team have finally found some consistency, winning 8 of 12 games in all competitions, with away triumph over Fiorentina significantly boosting their European hopes.

However, just as everyone expected the Giallorossi to cement the fifth place in the standings they go on and lose at home to Chievo.

This means that Aurelio Andreazzoli’s side now need to beat both Milan and Napoli and hope other results will go their way if they are to achieve European qualification.

That being said, Coppa Italia is another route to Europa League, but beating arch rivals Lazio in the final will be no easy task.

As far as the Milan game is concerned, first choice keeper Maarten Stekelenburg is definitely out, while Daniele De Rossi, Federico Balzaretti and Pablo Daniel Osvaldo are injury worries.