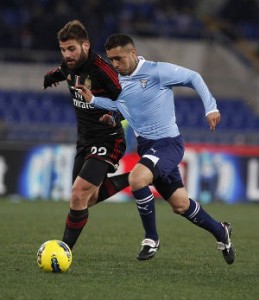 New Milan boss Filippo Inzaghi will enjoy his coaching debut at San Siro against Lazio, a team that were seriously reinforced over the summer.

And with both sides desperate to improve on last season’s performance, chances are we will see a very interesting game on Sunday evening.

AC Milan largely struggled to live up to their potential last term, finishing the league campaign in eighth position, albeit three points adrift of European places.

Max Allegri and Clarence Seedorf were both sacked in the process, with youth team coach Filippo Inzaghi taking over the reigns.

The Rossoneri have spent the entire summer looking for ways to improve their squad, but the poor financial situation has proved to be a major issue, preventing the club from making too many quality signings.

Diego Lopez, Pablo Armero, Jeremy Menez and Alex were the only notable signings, while Mario Balotelli, Robinho, Kevin Constant and Kaka all left.

The Rossoneri are expected to be very busy in the final days of the summer transfer window, but the team do not look well prepared for the opening match against Lazio, where home win pays 2.05 (21/20).

Defenders Philippe Mexes and Mattia De Sciglio are both suspended, while Riccardo Montolivo is the only long-term casualty.

Just like their next opponents, Lazio had to strengthen following an utterly disappointing campaign, but they did a much better job than AC Milan.

The Biancocelesti have signed some high-quality footballers such as Filip Djordjevic, Dusan Basta, Marco Parolo and Stefan de Vrij, and with the likes of Klose, Candreva and Ledesma still in the side, they have reason to hope for a successful season.

Lazio looked quite good in pre-season before recording a 7-0 triumph over minnows Bassano Virtus in the Coppa Italia and they can now be backed at 4.20 (16/5) to pour more misery on AC Milan.

The Biancocelesti did well on the travels last term, winning five of last nine league games on the road, and they will be looking to further improve on that record.

Bruno Pereirinha misses out through suspension, whilst Ogenyi Onazi is doubtful and Federico Marchetti is out injured.