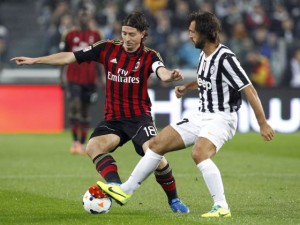 Milan climbed to the top of the Serie A standings thanks to the impressive start under Filippo Inzaghi, but it is against the reigning champions that they need to prove their title credentials.

Meanwhile, the Bianconeri have won all three competitive matches since Max Allegri took over and they aim to prove they remain the number one candidates for the league trophy.

After the Clarence Seedorf experiment failed, many were surprised to see the Rossoneri chiefs take a gamble with another inexperienced coach, but so far has been so good.

Backed by the heavy summer recruitment, Filippo Inzaghi led his side to a 3-1 home win over Lazio, before enjoying a 5-4 away victory over Parma to keep the 100% record intact.

And considering that the Rossoneri are now flying on confidence, bear in mind they are available at 3.50 (5/2) to defeat the Serie A holders.

Milan were beaten 2-0 by Juventus in the same fixture last term, but after also losing to Parma at home, the Rossoneri have since won all six league matches at San Siro.

New signing Fernando Torres has resumed full training, but he is unlikely to start, while Stephan El Shaarawy also returns in contention.

While Juventus signed Patrice Evra, Romulo, Kingsley Coman and Alvaro Morata to increase competition for places, little did they know they will have to cope without Antonio Conte.

And even if many doubt that Max Allegri is good enough to succeed in Turin, he has so far done pretty well at his new club.

Similar to last season, when they conceded very few goals, Juventus kept a clean sheet in each of the first three matches of the season, with five goals scored proving more than enough for three wins.

The Bianconeri successfully negotiated Serie A fixtures against Chievo and Udinese while also defeating Malmo FF in the Champions League, and can now be backed at 2.30 (13/10) to claim maximum points at San Siro.

Having won seven of last eight matches on the road in Serie A, Juventus are rightly considered favourites to see off Milan.

Andrea Pirlo and Luca Marrone are not yet ready to return from injury, but Andrea Barzagli is back and Arturo Vidal is doubtful.