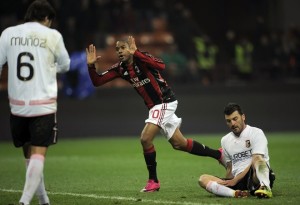 Italian giants AC Milan have announced that Brazilian forward Robinho will be allowed to leave the club on 30th June 2015.

The 31-year-old has enjoyed a successful loan spell with former club Santos and he was widely expected to make the transfer permanent in the summer.

And even though his contract was due to expire in June 2016, the Rossoneri have revealed that have agreed to let the forward leave on a free in the summer.

“Milan and Robinho have resolved consensually the contract between the Brazilian player to the Rossoneri club until 30 June 2016,” the club said on Wednesday.

“The contract is terminated on June 30, 2015, and Robinho will be free from contractual obligations from 1 July 2015.

“AC Milan thanks Robinho. He has made a significant contribution, in terms of goals and performance.

“Although the relationship between the club and the Brazilian are terminated one year prior to the natural expiration of the contract, Milan does not forget the contribution of quality given by Robinho.”

The Rossoneri are widely tipped for a major squad rebuilding in the summer, while they are 2.38 (11/8) to defeat Sassuolo on the road next weekend.