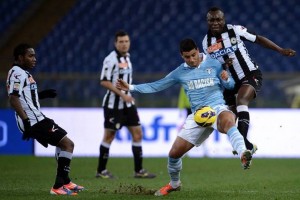 The final match of Gameweek 4 in Italian Serie A will see underperforming Lazio play host to high-flyers Udinese at Stadio Olimpico.

And while the Biancocelesti will be eager to arrest the poor run, their opponents aim to further improve their league position after a bright start.

Following yet another disappointing campaign, Lazio chiefs were eager to help the club return to where they belong and they in turn did very well during the summer transfer window.

While keeping hold of in-demand Candreva, Keita and Lulic, the Biancocelesti signed Djordjevic, Basta, de Vrij, Parolo and Gentiletti, among others, to seriously reinforce all areas of the team.

However, the team have clearly yet to gel properly since Lazio experienced all sorts of problems in the opening exchanges, especially on the road.

The Biancocelesti were beaten by both AC Milan and Genoa on the travels, while beating Cesena at home, and they are 1.91 (10/11) to return to winning ways against Udinese.

Boss Stefano Piolo is counting the costs of the defeat at Stadio Luigi Ferraris given that Santiago Gentiletti has been ruled out for six months and Lucas Biglia is also sidelined.

The good news is that Dusan Basta has resumed training, but Stefan Radu, Alvaro Gonzalez and Danilo Cataldi are out injured and Stefan de Vrij is banned.

Just like they do every summer, Udinese again made serious changes to the playing squad, which is why they were not really expected to hit the ground running early on, but Francesco Guidolin’s side have largely impressed so far.

After hammering Ternana in Coppa Italia, courtesy of Antonio Di Natale’s five goals, the Zebrette enjoyed a comfortable triumph over Empoli at the start of Serie A, with the veteran striker bagging a brace.

Udinese were then unable to match holders Juventus in Turin, losing the clash 2-0, but they quickly returned to the right track.

The Friulani continued the good home run by beating Napoli at the weekend and they now hope to frustrate another top 5 side.

The problem is that Udinese are winless in last eight away matches in Serie A, but they are 5.00 (4/1) to end the barren run at Stadio Olimpico.