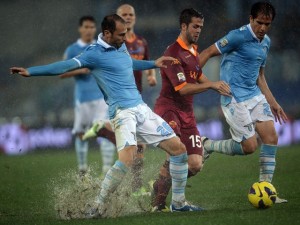 It’s been a while since both Lazio and AS Roma headed into Derby della Capitale in such great spirits, so this could prove to be one of the most interesting local derbies yet.

The Giallorossi sit one point clear of their local rivals, but it is the Biancocelesti who are in better form at the moment.

Claudio Lotito and his associates have invested a lot of time and money in an attempt to take Lazio back where they belong, but they have had little success in the past.

However, this could prove to be a breakthrough season for the Stadio Olimpico outfit, who have notched up some excellent results after a shaky start.

Lazio are unbeaten in last nine Serie A fixtures, and having won six of those, they now trail second-placed AS Roma by a single point.

Therefore, this will feel as a perfect opportunity to end a three-match losing run in meetings with the Giallorossi, so bear in mind that Lazio are priced at 2.90 (19/10) to claim maximum points.

Simone Inzaghi is sweating over the fitness of Stefan de Vrij and Federico Marchetti, but Jordan Lukaku, Luis Alberto and Ricardo Kishna are back in contention.

AS Roma have done somewhat better than their local rivals in recent years, but they, too, have failed to live up to the billing.

The Giallorossi, however, seem determined to change their destiny having played some great football this season, mostly thanks to Edin Dzeko and Mohamed Salah.

The duo has already scored 20 league goals between them this term, which is more than each of ten Serie A teams have scored in total.

Nevertheless, the entire team have got to be given credit for helping AS Roma climb to second in the standings, with leaders Juventus now mere four points in front.

The Giallorossi are all too aware that they cannot afford to relax just yet as a poor result in Derby della Capitale could prove quite costly.

Vincenzo Montella will probably have to make do without star player Mohamed Salah, who has picked up an ankle injury in training.

The good news is that Kostas Manolas should be fit to play, but Stephan El Shaarawy is doubtful and Alessandro Florenzi and Leandro Paredes are out injured.