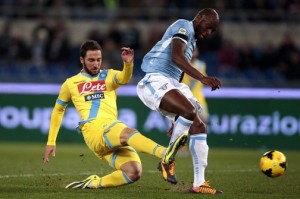 The Serie A top 3 rivals will also be vying for one place in the Coppa Italia final, with the first leg taking place on Wednesday at Stadio Olimpico.

Lazio enter the match in much better spirits having won three games in a row, while Napoli hope to make amends for weekend’s loss to Torino.

This could prove to be a breakthrough season for the Biancocelesti, who have seen heavy investment in the playing squad pay off.

Stefano Pioli and his charges did not have it easy this term, hitting several patches of poor form, but the recent promising run saw them effectively revive their Champions League hopes.

Lazio defeated Udinese, Palermo and Sassuolo to climb within two points of third-placed Napoli and they can now put extra pressure on the Azzurri by beating them in Coppa Italia.

Seeing as the hosts are brimming with confidence at the moment, bear in mind that home win is available at 2.60 (8/5) with Betfred.

Stefano Pioli will have starting defender Dusan Basta available after recovering from a bout of flu, while Miroslav Klose is set to be recalled.

Captain Stefano Mauri is expected to miss out having suffered a toe injury, while goalkeeper Federico Marchetti is a major doubt.

Despite playing well for big part of the current campaign, Napoli are in danger of seeing this season turn into an utter disappointment.

The Azzurri are still in the race for Europa League and Coppa Italia titles, but their Champions League qualification is now in serious danger.

Napoli have now lost two of last three league fixtures, allowing their top 3 rivals to close the gap, with both Lazio and Fiorentina now breathing down their necks.

And while weekend’s league match against Inter will be very important, the Azzurri will also want to do well in the first leg of their semi-final tie with Lazio.

Having defeated the Biancocelesti at Stadio Olimpico in the league some six weeks ago, Napoli can be backed at 3.10 (21/10) to do it all over again.

Rafa Benitez will make several changes to his starting line-up, with Mariano Andujar set to start in goal, but Juan Zuniga has failed to recover in time to face Lazio.