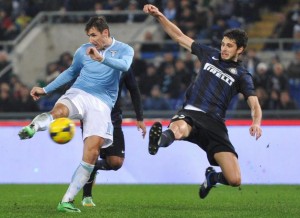 While Lazio will be eager to ward off challenge from Napoli by defeating Inter on Sunday evening, the Nerazzurri will be aiming to make amends for the goalless draw with Chievo and improve their Europa League chances.

The Biancocelesti have done brilliantly to recover from a somewhat slow start and their performances since mid February have been absolutely amazing.

A string of excellent showings saw Lazio revive their Champions League hopes and a place in the top 3 is now theirs to lose.

Having also made it to the Coppa Italia final, where they will be vying champions Juventus for the coveted title, the Biancocelesti have got plenty of reason for optimism at the moment.

But, having only taken one point from the away fixture against Atalanta, Lazio will be hoping to return to winning ways against Inter Milan, and they are 1.91 (10/11) to succeed in their quest.

Coach Stefano Pioli is sweating over the fitness of Stefan de Vrij and Lucas Biglia, with the Argentine more likely to start between the two.

Meanwhile, Senad Lulic has joined Lorik Cana, Ederson and Bruno Pereirinha in the infirmary, while striker Filip Djordjevic is slowly stepping up his fitness.

Regardless of the outcome of the last four fixtures, the current season will not be deemed a success, but Inter have a chance to create a good base for the next campaign.

The Nerazzurri have shown some improvement after a seven-match winless run on all fronts and they are now unbeaten in last five.

While sharing spoils with AC Milan, Inter defeated the likes of Hellas Verona, Roma and Udinese, but the home draw with Chievo cannot be considered a good result.

And with Europa League positions still within reach, the Nerazzurri will give their best to try and get something from the Lazio game, where away win is priced at 4.75 (15/4).

Andrea Ranocchia has missed training this week, but he is expected to start, whereas Jonathan, Dodo, Hugo Campagnaro and Marco Andreolli are out injured.

It may be important to note that Inter have won last two away games in Serie A, as well as four of last six, albeit only recording wins against bottom-table sides.