Juventus vs AS Roma preview 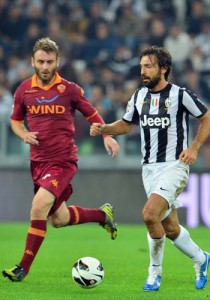 Sitting just four points clear of the second-placed AS Roma, Juventus need to try and win Saturday’s clash if they want to remain main candidates for the league trophy.

The Giallorossi, on the other hand, could make a real statement if they manage to add the Bianconeri scalp to those of Lazio and AC Milan.

Even if it seems that Juventus had no seriously title rivals in recent years, the reality is that Napoli and AS Roma threatened to remove the Turin side from the throne, but ultimately failed to do so.

It was narrow victories in matches like this one that helped the Bianconeri ensure a calm finish to the season and another such triumph would see them extend their lead to huge seven points.

While they already lost three league games on the road, Juventus’ home form has been nothing short of impressive and he is one stat you need to wrap your head around.

Namely, the Bianconeri have recorded amazing 24 straight Serie A victories at home, so no wonder they have been made 1.80 (4/5) favourites to see off AS Roma as well.

Head coach Max Allegri is set to welcome back key players Miralem Pjanic and Paulo Dybala after the duo was rested in the derby clash with Torino.

Latest reports suggest that Andrea Barzagli will return from injury, but Dani Alves, Leonardo Bonucci, Rolando Mandragora and Marko Pjaca all miss out.

AS Roma will relish the opportunity to test their skills against mighty Juventus, especially after several painful defeats in recent years.

The controversial 3-2 loss in Turin back in October 2014 was especially difficult to take as the Giallorossi had been in excellent form at the time and many believe they would go on to claim the coveted title.

The Gialorossi do need to win in Turin if they want to improve their title hopes, and they are priced at 4.75 (15/4) to claim maximum points and end Juventus’ 24-match winning run in the league on home soil.

Luciano Spalletti has even bigger selection problems than his counterpart, but at least he has no dilemmas over the starting line-up.

Mohamed Salah, Alessandro Florenzi and Bruno Peres are definitely out, whereas Leandro Paredes has an outside chance of making the matchday squad.