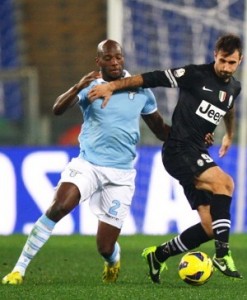 Serie A leaders Juventus take on fourth-placed Lazio in what should be a highly entertaining encounter in Turin, with both sides hoping to emerge triumphant.

The Bianconeri are in the driving seat midway through the season, but their unexpected defeat to arch rivals Fiorentina have just made the title chase a lot more interesting.

Juventus are now just one point clear of AS Roma and even though Max Allegri’s charges have a game in hand, they definitely cannot afford to drop their guard.

The 2-1 loss at Artemio Franchi was the second setback within the last month as the Bianconeri were also pipped to the Italian Super Cup trophy by AC Milan.

Juventus now need to return to winning ways as soon as possible, but they will not have an easy job against red-hot Lazio.

On top of that, Dani Alves, Mehdi Benatia, Mario Lemina and Federico Matiello are all unavailable for the high-profile clash against Lazio.

It’s now been nine years since Lazio last played Champions League football, so it goes without saying that top 3 finish in Italian Serie A is the number one goal this season.

Things have been going really well so far as the Biancocelesti sit just one point behind third-placed Napoli, but it is the Juventus game that will be a real test to their ambitions.

In case they win in Turin, Lazio will be effectively in the title chase, so this is another reason for the player to give their best on Sunday morning.

The Biancocelesti have been in fine form of late, winning five of last six fixtures in all competitions, although their away record does leave something to the imagination.

However, with four wins in nine away games (D3 L2), Lazio have reason for optimism ahead of the trip to Turin, and it remains to be seen whether they will deliver.