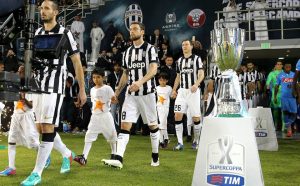 Juventus will aim to get their first piece of silverware this season as they take on AC Milan in the Supercoppa Italia at the King Abdullah Sports City Stadium in Saudi Arabia on Wednesday evening.

The Old Lady currently sit nine points clear at the top of the Serie A table and look extremely likely to be named champions yet again having not suffered a loss so far this season. As a matter of fact, odds as narrow as 2/7 are available with William Hill for them to lift the trophy on Wednesday evening. However, they have not managed to claim the Super Cup title since the 2015/16 season.

Elsewhere, Gennaro Gatusso’s troops have only won two out of their last eight league games and have dropped to fifth in the Serie A. They are at 200/1 to win the league come the conclusion of the campaign and have odds of 5/2 with BetVictor to claim the Supercoppa.

The history between the two sides does not bode particularly well for AC Milan this weekend. In league play, Milan have only managed to win one out of the last ten meetings, which includes Juventus’ 2-0 victory at the San Siro back in October. As a matter of fact, the Rossoneri have not won at the Juventus Stadium since 2011. However, they did manage to claim victory the last time the two sides clashed in the Italian Super Cup.  Following a 1-1 draw in normal time thanks to goals from Giogio Chiellini and Giacomo Bonaventura, AC Milan secured a 3-2 penalty shoot-out victory. Both teams to score again on Wednesday evening is available at a price of 11/10 with Betfred.

Max Allegri’s troops could potentially be hampered by a few injuries against AC Milan. Mario Mandzukic is ruled out with a muscle injury, whilst Juan Cuadrado is also still out. Elsewhere, defensive duo Mehdi Benatia and Andrea Barzagli are also restricted to the sidelines. Regarding AC Milan, they also have a few absentees with the likes of Lucas Biglia, Giacomo Bonaventura, Mattia Caldara and Suso are all unable to play a part.

Naturally, Serie A top scorer Cristiano Ronaldo is one of the favourites to open the scoring and can be backed at 2/1 with Coral to add to his 15 goals in all competitions so far this season. Elsewhere, Gonzalo Higuain could come up against his former employers and is available at 7/1 to score the first goal of the game despite rumours of an imminent move to Chelsea.